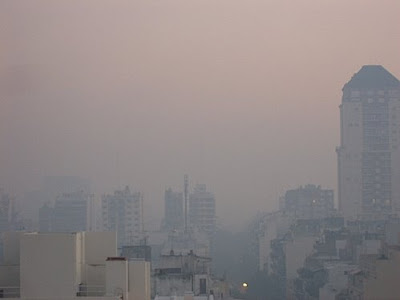 Once again, we're suffering the consequences in the big cities of irresponsible behaviour of the uncivil countryside farmers and ranchers.

Bloomberg has a nice report over here. Which reads, in part:

Interior Minister Florencio Randazzo called the smoke a ``disaster'' and said 292 separate fires covering 70,000 hectares (173,000 acres) had been detected in the provinces of Buenos Aires and neighboring Entre Rios. The smell of smoke filled homes and offices across the city, and views of landmarks, including the downtown Obelisk and the Defense Ministry building, were clouded.

``Those responsible are farmers who are burning their meadows to cut their costs and maximize their profits without considering the consequences,'' said Randazzo in a news conference at the Presidential Palace. ``We are conducting investigations to find those responsible.''

The use of fires to clear land in the Argentine countryside and the Parana River delta is an annual occurrence. Randazzo said more land is being burned in the delta area near Buenos Aires this year as farmers seek new pastures for cattle that previously grazed on land now dedicated to soybeans.

Here's what it all looked like from my flat, yesterday night, and this morning. 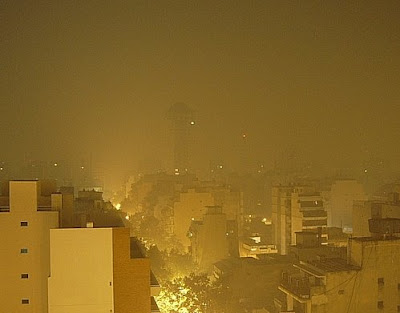 I have to ask something more... the unaccounted damage to the city's image to the thousands of foreign visitors that choose Buenos Aires for their stay. I can imagine several thinking "never again, you can't breathe down there when the wind brings the smoke from the countryside farms".

Let's pave the countryside. There's plenty of other countries without land space which import wheat and and still manage to eat. We have plenty of cows on feedlots as well. The rancher and small farmer are a dying species, anyway. Yes, I'm mad at these morons and pricky rednecks. And the wealthy landowners whom surely gave the orders to start these fires, are even worse.

Here's a nice satellite pic from our Big Brothers up North, where you can see the extent of the fires and smoke damage created by these dimwits...

640px wide version uploaded to my blog just in case NASA.gov deletes it 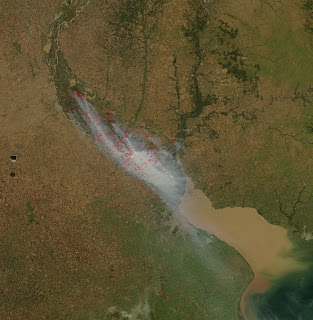 [Click to zoom it]
FC
PS: These *ssholes caused several deaths due to the reduced visibility in several roads. has shut down airports and air traffic, as well as inter-state bus traffic. Two people are apparently in custody already for the illegal fires. I hope the land owners are sued to death.

PS#2: Even right-wing pro-agriculture paper La Nacion says it clearly here "the expansion of the agriculture frontier is being developed with great violence. There's a thirst for exploiting the fields that leads agriculture producers to an irresponsible management of their production. That's the reason why the smoke has reached Buenos Aires city" told LANACION.com Claudio Bertonatti, communications and Education manager at the NGO Argentina's Wildlife Fundation, Fundación Vida Silvestre."

" Soybean. The problem is that the soil there is fragile, say the experts, it might be useful for cattle but not so for agriculture 'while we do know that some soybean producers have bought cheap land there to use it for soybean, the problem is also the large number of cattle that is being entered into the area" said Gerardo Mujica, director at the INTA's Experimental Station at the Parana's Delta."

Jeez, that looks nasty. You guys don't have a pro-ethanol lobby down there, do you? :)

I was in that city when the smoke appeared!
I was staying at my apartment in Buenos Aires when I woke up and smelt it!, That was awfull haha. I wanna go back there now that the smoke dissappeared!!!