It was about time Hollywood recognized JJ Campanella´s work 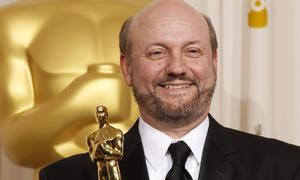 This is the JJ Campanella the World+Dog now knows...

It was about time that Hollywood recognized Juan José Campanella´s outstanding work which won many awards both locally and internationally over the years.

Down here we knew him well, but not wearing a tuxedo, but more resembling something like this:

My hat´s off to Campanella, and the beautiful Sole Villamil.

It´s rarely mentioned in the foreign press that Campanella also stars one of the best educational programmes on the public TV (government-run) Educational TV channel Encuentro, created in 2007.

The TV program where Campanella shines as one of the hosts is dubbed "Invisible Environments (of Science and Technology)" (Entornos Invisibles de la Ciencia y la Tecnología) and explains how physics and basic technology works (from the electric grid , to Newton´s laws to.. you-name-it) with a large dose of humour thrown in the mix.

It airs on Encuentro as mentioned, which is available on all cable systems for free, and soon free over the air too, thanks to TDT...

Sorry, you´ll have to learn Spanish first. :)
FC
Posted by Nerd Progre at 2:49 AM No comments: