Argentines have a short memory span - The "New Politics" -that are really oldskool-, won....

Unless you've been living in a bottle, let me tell you that we had ellections down here for city mayor and the right wing candidate won. 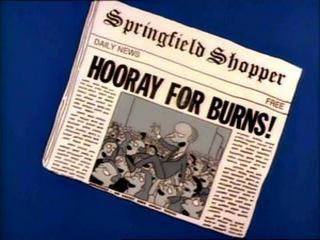 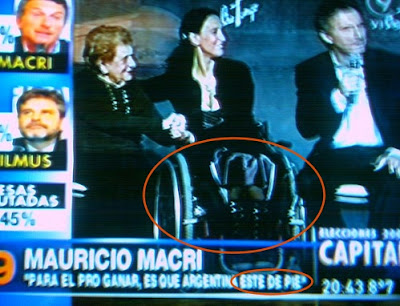 ¡Poor joke Mauritzio! ¡Saying that Argentina must get on its feet, with Michetti on wheelchair next to you!!
Very inconsiderate of you with your loved Free Trade Agreements expert at the WTO 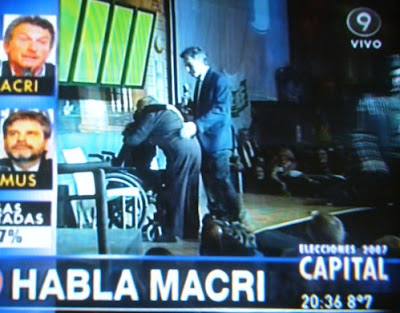 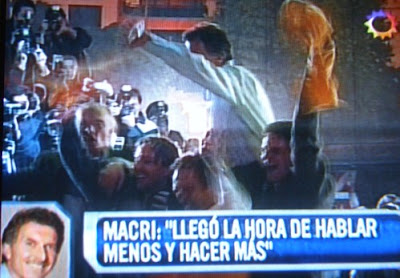 ¡Speaking about "not speaking" is even more PRO!

According to "Mauricio" the middle class or "so-so class" as Mafalda called it will be able to "drink mate again in front of their homes" and Buenos Aires will turn overnight, by the power of his "magic" into a city "without security fences in parks, no security bars in shops, no security bars at homes, ENOUGH! Buenos Aires is not our (loved) city anymore!" .

Well, Mauricio, it's your turn now to see how you perform. That assorted bag of leftovers from different right wing factions that is PRO with people from the far right UCeDe, allong with collaborators of former finance minister Domingo Cavallo (or Sunday Horse as I like to call him), succeeded in convincing the -once again- "so-so (middle) class" that a businessman like you is more experienced and more trustworthy than someone from the academia.

And that your work experience "working on dad's firms" after a brief 6 months tenure at Citibank are better attributes than the vast academic experience of Daniel Filmus, someone with a remarkable background.

¡Thank the heavens your campaign manager Rodriguez Larreta was "very succesfull" at handling Social Security and even your conservative colleagues remember him!.

I'm sure you will turn the city upside down and that Utopian vision of grandmas drinking mate in front of their homes (with the door open behind them as was the earlier XXth century image), will become real. Yeah, right. I specially like your compaign promise about the parks without fences and the shops and homes without security bars at windows.

¡If you believed Mauricio's empty promises above, let me tell you I have bridge I could also sell you!. No city as big as Buenos Aires is without crime. That simply does not exist. For some reason (I suspect the reason but I'd be accused of being a tinfoil hat conspiracy theorist) the local media seems to have established the notion that "the crime wave doesn't stop" assuming that it's even possible for crime to "stop". IF that would be the case, there would be cities around the world with no police, and that doesn't exist.

In fact, crime has been going up in the US of A in the last few years...

Even though the higher violent crime numbers had been expected, they still represented bad news for Attorney General Alberto Gonzales, who has targeted violent crime as a top priority for the U.S. Justice Department. A department study released last month of 18 metropolitan areas cited more violence by local gangs or street crews, a greater prevalence of guns in the hands of criminals and younger, more violent offenders as key reasons for the rising crime rates.
------ 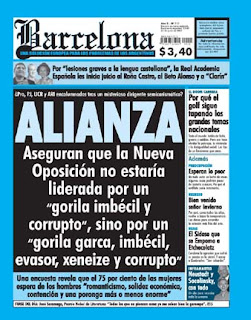 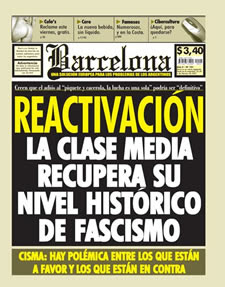 ¡Here comes the New Politics that is "non-partisan" ! ¡The new "sweetened" right! ¡Hooray for PRO! Hooray for the UceDe! Alvaro Alzogaray must be smiling in his rotting grave...

Two weeks ago I received one of those e-mail chain letters, forwarded by someone not too bright that I know, the kind of person who cannot send e-mail with bcc: and always copies his entire list, in plain view to everyone who receives each message, you know the kind of middle-class "so-so class". The mail content was 100% anti-Kirchner and had by subject line "I don't give a damn about politics!" and called upon the reader to "vote for change" and babbled about the 'new politics', pointing the blame on the K administration for everything from 'drugs and pickpockets' to car accidents and 'soccer hooligans'(!)".

But hey... we cannot ask the average Mrs. Jane Doe to distinguish between the current Mayor -who was not elected to the post but rather "landed" on it after Ibarra was ousted- and Kirchner's candidate.... Mrs. Jane Doe was ANGRY, angry at...well... something... and she voted for "Saint Mauricio!".

I end this analysis with a quote I've seen on the Net, used as forum taglines...

¡¡So, let's enjoy the coming "City without fences" headed by the "New Politks" which are really oldskool rightwing!

FC
Posted by Nerd Progre at 6:37 AM No comments: